An object of class HTTPServerConnectionHandler creates HTTPConnections and invokes the processing of headers and parameters. This class handles HTTP/1.1 and HTTP/1.0 requests. It sets a minimal set of required headers.

Selector goes through a supplied list of Matchers that in turn inspect HTTPConnection (mostly for request URI) and decide whether or not to pass control to the ConnectionHandler they are pointing to.

There are two supplied important implementations of the Matcher interface: Prefix and Pattern.

Pattern uses regular expressions to match against the current request URI. If it matches it passes control to the ConnectionHandler it points to.

The Matcher interface supplies one more pieces of information to the Selector class to enable it to determine whether it should stop on the first match or alternatively continue with the list even if a match is found. The default value is true, which prevents the Selector going further down the list. Setting that value to false would provide filter-like functionality, where ConnectionHandler can act as a filter and enable the Selector to continue with other matches.

For more complex matching, Pattern matchers should be used. However, care must be taken to ensure that changes are not made to the current request URI (which is what a Prefix matcher would do). Also, it is posible for custom (dynamically assigned) Prefix implementations to be introduced for more complex logic involving the matching of incoming URIs.

There is one more, special, case of the Matcher interface implementation: WelcomeFile. This matcher matches only "/" paths. Also, when matched it adds value of welcomeFile property as componentResourcePath of current connection. If, for instance, linked with ReadOnlyFileConnectionHandler it acts as would welcome files in some web servers.

As already mentioned, ConnectionHandler implementations are actually handling the requests. There are only handful of such implementations supplied with this distribution: 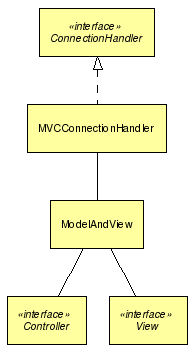 Note: This way of modelling the MVC is inspired by the Spring_ framework.

The ModelAndView object contains two fields only: the name of the view to be selected by the View implementation and the Map that represents the model. Various view layer technologies (Velocity, Freemarker, etc) have adopted such an approach. Even the JSTL tag library for JSP s can use this as the subset of scopes it caters for.